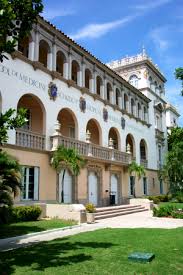 In the XIX century, great health problems afflicted the population. Anemia, malnutrition and parasitism where only some of the most common illnesses in children and adults. The need of effective health plans became a priority ever since the United States troops arrived in 1898. With the sovereignty change anemia commissions were created to manage this problem. That is how the Tropical Medicine Institute was founded in 1912.

In 1926 the School of Tropical Medicine was consolidated from the Institute of Tropical Medicine. The University of Columbia provided the funds that were used to train health professionals in the island. Studies of unknown tropical illnesses, which caused one of the major problems suffered by Puerto Rico, were conducted at the same time. Unfortunately, the University of Columbia decided to cancel the funds in 1946 which caused the closing of the School.

School of Medicine of the University of Puerto Rico

In 1960 the University established its graduate programs along with other medical services and research. Distinguished professors of Europe, Latin America and the United States visited the School with academic, research and consultation goals.

The name of Medical Sciences Campus was first heard of in 1966 and its building was constructed in 1972 near the Medical Center. It has the only specialized schools in Puerto Rico such as Pharmacy (1913), Dentistry (1957), Public Health School (1970), School of Health Related Professions (1976) y the School of Nursing (1995). The Campus has three support Deanships: Administration, Students and Academic Affairs. It has over 2,000 full-time employees (623 faculty members and 1,454 non-faculty employees) and approximately 3,000 students.

The diversity of services, complexity and forefront coverage in the health area have made the Medical Sciences Campus responsible of superior education in every subject it covers. This positions us as a leader in research, service and clinical aspects and assures our mission of teaching and better the health of the people of Puerto Rico and presents us as forefront professionals in the world.